Skip to content
Tony Padegimas How To Advice, Life on the Trail, Product Review October 17, 2018 4 Minutes

[This is a thing we do here from time to time. Unless noted, you can assume I bought the item in question.]

Several years ago (2013) prior to what would become the Last Family Camping Trip, my wife and I, once we realized we did not have the finances to pull off any level of RV trailer, decided the consolation prize would be a really good tent. Our teenage kids, by his point, preferred their own tents, the dogs were not coming, and our giant, two room tent seemed actually too large. Also, it had leaks and failing zippers and other maladies that beset aging tents.

After some shopping about, we settled upon the Eureka Copper Canyon 6. What sold us was the steep walls and high ceiling which maximized 10’x10’ living space within the tent. The tent tops out at 7’, but even better, the walls are at least 6’, and nearly vertical. That means normal adults can stand up anywhere in that 10’x10’ space. We were old enough that we did not want getting dressed to be an Olympic event anymore, and having space, not on the air mattress, to do that was what sold us.

Being able to sit in camp chairs inside a tent mitigates a lot of otherwise miserable circumstances at a campsite. Like riding out rainstorms. Or putting on socks.

Eureka touts the zippered port for an extension cord as some sort of big selling point. In my world-view that would be just another means for vermin to sneak in and/or another zipper to fail. People who value that sort of thing are really just biding time until they get an RV.

That said, I think we made use of it at a KOA in Oregon, so that the kids would have a dry spot to charge their phones besides the car. But the adults to not go out into the woods to stare at screens.

Make no mistake: this is a campground tent – not a wilderness expedition tent. It weighs about 30 pounds, and packs as thick as a sleeping bag and slightly longer. The zippers and the floor are all family camp grade. If you’re looking at heavy use, you will want some sort of ground-cloth, and a better grade of tent stakes than the ones that come with the tent. Mine had no leaks or zipper failures as of September 2018, but that’s really less than 20 use nights. 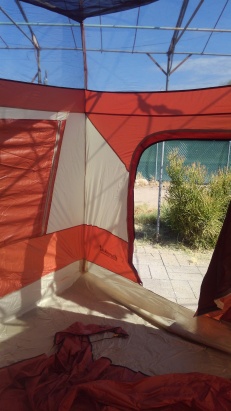 The three-season rating is somewhat aspirational. It will take some wind and rain, as all tents should, but the design is more about privacy in summer than resisting inclement weather in early spring or late fall.

To get vertical walls, they had to include plastic sleeves to provide rigid corners. That works well, but setting the poles into those sleeves will take strong hands, and it is a LOT easier with two people. That said, I can set it up and take it down by myself in the same 20 minutes Eureka says is normal, but I’m pretty good at this sort of thing.

You could not leave this to junior high children and expect success. 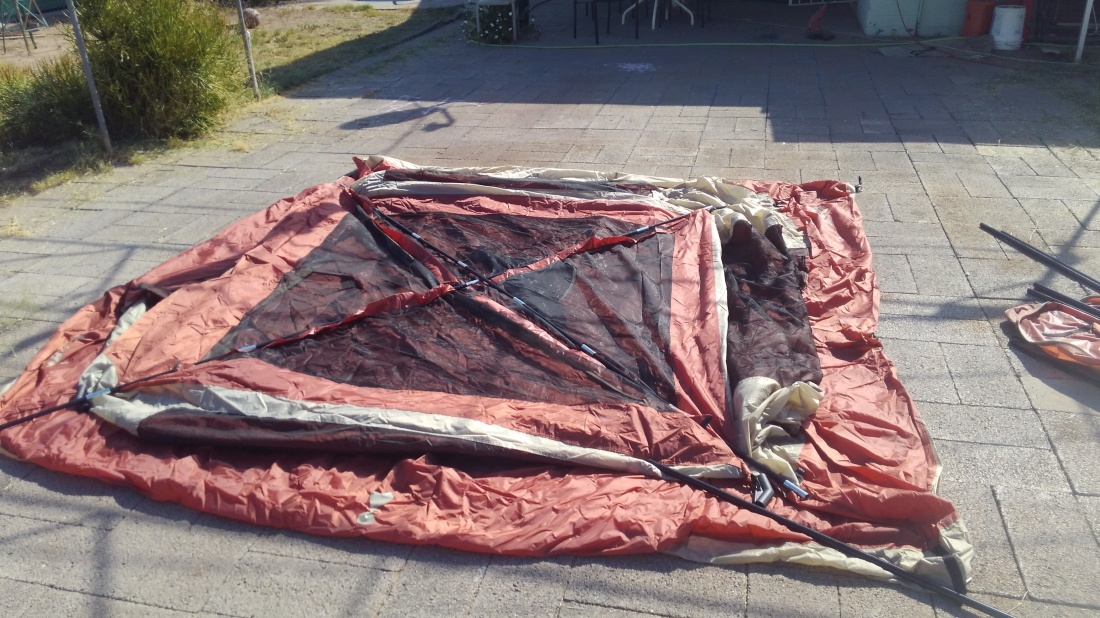 Minor nuisances in setting up: the upper tent poles, the wide ones, are longer than you think, and must go through sleeves at the top. Sleeves always aggravate me, and you will struggle to keep the extended end out of the dirt. Making the vertical poles will take strong hands. The rain fly is several orders of magnitude easier with two people, but that would be the case with any tent of this size.

Eureka did mark one corner for reference (this matters) and there are pockets in the rain-fly to stow the guy-lines, which saves a treasure hunt for yet another nylon sack.

Unlike Eureka’s backpacking tents, the carry bag is actually generously sized. You do not have to refold the thing to within a millimeter of factory spec to get it back inside the bag. I fold it ends to center and one more time over, but the tent is square – it really doesn’t matter which end you fold from. Four folds will leave the tent no wider than the bag of poles. Plop that bag on one end, roll to the other, and shove it in the bag.

I do not bring this thing when I camp alone – I have a hammock. But recently I had occasion to camp in a campground with a guest. Hammocks do not work well with campgrounds, or guests.

In the video below, I set it up in my backyard because I hadn’t used it in a while, and I wanted to make sure it was still complete and intact. The rest is from the above mentioned campground, namely Hualapai Mountain Regional Park near Kingman AZ.

I remember paying nearly $600 for this tent in 2013, because it was the new whiz-bang thing, and we had lost our window to shop around for price. Eureka now lists it at $259.95. That’s worth the money, if you need to duplicate your bedroom at the campsite.

A freelance writer - among many other things (including a non-literary day-job) living out the middle-class dream in Phoenix AZ. View all posts by Tony Padegimas