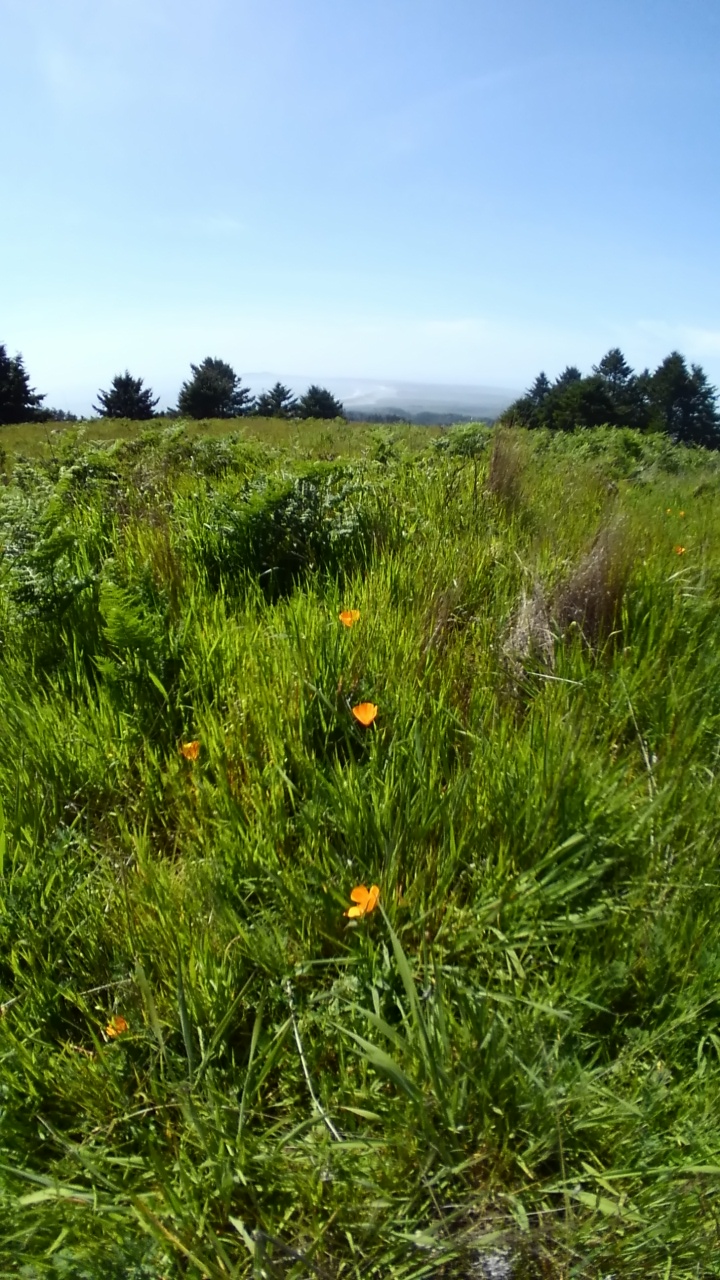 In April of 2018 I scored a permit to camp inside the Point Reyes National Seashore just north of San Francisco. There are no drive-in campsites in Point Reyes; they are all walk-in or boat in. In the case of the Glen Campground, where I had a ($20) permit, this meant about 5 miles from the visitor center.

The Bear Canyon Visitor Center is everyone’s first stop, being where the permits come from, and correspondingly crowded. Get beyond it, and the little maze of day-use trails wandering around the picnic grounds, and the crowds started to thin, even on a Sunday afternoon with good weather.

I headed south(ish) along the Bear Valley trail until I realized this dirt road is everyone’s day hike. So I cut to the right, west, up the Meadow Trail. This spur trail cuts steeply uphill to the Skyline Trail, which bisects the main ridge forming the peninsula.

The heart of Point Reyes is Inverness Ridge, which has been separated from Bolinas Ridge on the coast be the San Andreas fault. To the north end of the peninsula, that fault line is submerged by Tomales Bay. To the south it runs roughly under Highway 1. Point Reyes is a couple notches of Richter Scale away from being an island.

The thick canopy of trees and brush are all part of the Phillip Burton Wilderness, which actually encompasses about a third of the total peninsula. The rest is extant private ranches and a scattering of state and local parks.

It felt strange climbing the hill, until I realized that I was still at about 700’ total elevation. The atmosphere was still thick. And humid – I soaked everything in sweat with temps in the low 80’s.

About a mile and a half past where I picked it up from the Meadow trail, Skyline winds down the west side of the ridge towards but not to the Pacific. The trees open up, and you are in for a heavy dose of sea breeze and sunlight. It cuts back inland to cross Coast Creek via a wooden bridge. I snuck off to the side here,and found a place to force my feet into the frigid creek.

I wasn’t at blisters yet, but I could feel them coming.

Happily, I was less than a mile at that point from Glen Camp, though I likely hiked 6.5 miles overall taking the scenic route.

The walk-in campsite has twelve designated sites fanning out from a vault toilet. Each campsite has a table, fire ring and an enclosure to protect your food from ambitious raccoons. There is also, unpublicized, a water spicket available for use. I had to hang my hammock over some pretty steep hillside, but otherwise had no complaints.

In April, the overnight low reached the low 40’s, maybe upper 30’s. I had to use all my layers.

In the morning, after a leisurely – for me – breakfast, I conceded to my blisters and took a more direct route to the wide and sunny Bear Valley trail. With the ridge to my west, and Divide Meadow refusing to block any morning sun to my east, and limp-marched back to the visitor center.

Even at that pace, I had time to drive out to McClure’s Beach towards the north tip of the Peninsula. You reach it via a narrow road winding sharply through prairie covered hills, where you are not likely to get out of 4th gear. The short trail follows a drainage to a wide beach flanked by tide pools. Worth it even with blisters.

Worth it more: the bar in Olema, the tiny town that guards the entrance to the park, where I had oysters and whiskey for a late-late lunch. Cannot recommend that sort of thing enough.

So, Easy, Scenic and Fun. The hard part is getting there – and totally worth it.